Elections don’t come around often but there are two speeches candidates and staffers need to know how to write: the victory and concession. 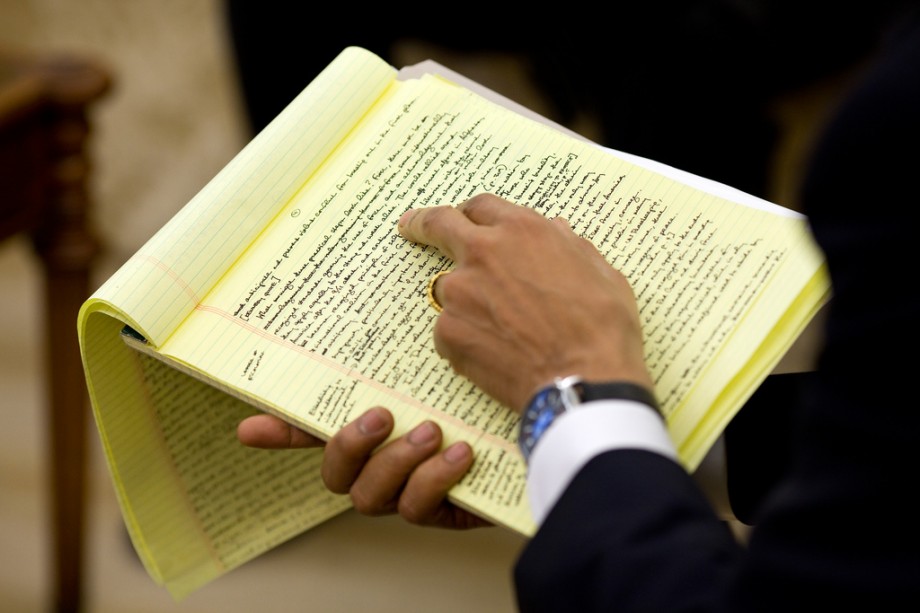 Around the United States there are hundreds of candidates in the last throes of an election campaign. Candidates and their staff will soon be turning their attention to the last speeches they will give: a victory speech or a concession. Here in New York, Bill de Blasio might only be thinking about one speech. His 40-point lead affords him the luxury to focus on his winning words.

But campaigns should always have two speeches ready, even if the candidate is only thinking about one. Mitt Romney was so confident he would win the presidency in 2012  he didn’t have a concession speech prepared. His staff didn’t either. It showed. He delivered a speech that was dull and lacking in class. And in a campaign that had no clear set of values guiding it, an on-the-fly concession speech had no chance of hitting the right notes.

If you’re a candidate you may not want to entertain the thought of losing. That’s fine — you’re in it to win it. It’s different if you’re a staffer — you have to have a concession speech drafted. The candidate might not use it, but it better be there for them if they need it.

The drafting process should begin with values. What are the values of the candidate? How were they expressed? How were they represented in the actions of the candidate and the policy ideas? Every political campaign should be guided by values. These values must underpin every piece of communication — emails to supporters, press interviews, one-on-one conversations with voters and speeches.They will help you craft the tone of both the victory speech and the concession. And that’s important thing to remember: victory and concession speeches are exercises in tone.

The best concession in recent memory is John McCain’s 2008 speech. He greeted supporters who were jeering the election of Barack Obama, but through his words and humility he managed to quell the boos and sum up the moment. Some highlights:

He praised his opponent:

In a contest as long and difficult as this campaign has been, his success alone commands my respect for his ability and perseverance. But that he managed to do so by inspiring the hopes of so many millions of Americans who had once wrongly believed that they had little at stake or little influence in the election of an American president is something I deeply admire and commend him for achieving.

He showed their similarities, not their differences:

I’ve always believed that America offers opportunities to all who have the industry and will to seize it. Senator Obama believes that, too. But we both recognize that though we have come a long way from the old injustices that once stained our nation’s reputation and denied some Americans the full blessings of American citizenship, the memory of them still had the power to wound.

Senator Obama has achieved a great thing for himself and for his country. I applaud him for it, and offer in my sincere sympathy that his beloved grandmother did not live to see this day, though our faith assures us she is at rest in the presence of her creator and so very proud of the good man she helped raise.

He pledged his support:

I urge all Americans who supported me to join me in not just congratulating him, but offering our next president our good will and earnest effort to find ways to come together, to find the necessary compromises, to bridge our differences, and help restore our prosperity, defend our security in a dangerous world, and leave our children and grandchildren a stronger, better country than we inherited.

The speech was on the long side, but the tone was excellent and he was sincere.

Traits of a concession speech

You’re not the main act. People want to hear from you but there’s not much that needs to be said — the campaign is over and this is your opponent’s moment. Let them have it. Limit your thank yous to three people. If you must thank more people acknowledge them as a group e.g. “my campaign team led by x”.

Concession speeches should be no more than five minutes long.

You lost because more people voted for the other candidate. Acknowledge your opponent’s victory and the will of the people. Highlight your similarities. Explicitly state that your opponent has your support to do what’s in the interests of people and the electorate (neighbourhood/district/borough/city/state/country). Remember this key point: elections are not about the candidates, they are about the people who voted.

Concession speeches indicate the end of a campaign. For candidates it can mean the last impression you leave on people. It may be the end of public life, returning to the regular job or the last time people see you before you have another crack. In these scenarios it’s important to win people’s respect and leave a good impression. The concession speech is the last opportunity to do this.

Kevin Rudd, the Australian Prime Minister, was given this opportunity and failed. His concession speech clocked in at over 20 minutes and the best he could offer his opponent was:

As PM of Australia I wish him well now in the high office of PM of this country. Therese and I wish he, Margie and their family well in coping with the stresses and strains of high office that lie ahead. We know a little bit of what that is like.

John McCain lost, but he won the respect of millions of people who saw him concede. Kevin Rudd lost more than the election.

Traits of a victory speech

Election victories are not ends in themselves so it’s important not to overplay the moment. It is time to be happy, but it also signals the beginning of the real work ahead. People’s lives depends in some part on the actions of the victor.

Chances are you’ve spent a good part of the campaign highlighting your opponent’s flaws. The victory speech is an opportunity to acknowledge the things about your opponent that you like. Where you share the same values, mention them. Acknowledge their service and their willingness to put themselves forward as someone ready to serve the people. If they called you to concede, mention it.

2. Acknowledge the support that helped you win

Campaigns don’t come down to a single person. Victories are won on the backs of many, often after months of continuous work. Acknowledge a few important individuals and include everyone else as a bloc mentioning the key ways they contributed towards the victory e.g. canvassing, making phone calls, donating, getting out the vote. Don’t go overboard with your thanks or people will tune out.

People voted, worked and volunteered for you because the saw something they liked. Chances are they were drawn to your values. Remind people what your values are and your commitment getting on with the job ahead. Mention who you will help and why. It’s not necessary to talk about the how.

People love hearing stories. Tell a story of someone who sums up what the campaign was all about. This could be someone the candidate met on the campaign trail. One of the most memorable parts of Obama’s 2008 speech was about a woman who lived long enough to vote for a black president. It’s a wonderful, heart-warming story which reinforced the values of the campaign:

This election had many firsts and many stories that will be told for generations. But one that’s on my mind tonight’s about a woman who cast her ballot in Atlanta. She’s a lot like the millions of others who stood in line to make their voice heard in this election except for one thing: Ann Nixon Cooper is 106 years old.

She was born just a generation past slavery; a time when there were no cars on the road or planes in the sky; when someone like her couldn’t vote for two reasons — because she was a woman and because of the color of her skin.

And tonight, I think about all that she’s seen throughout her century in America — the heartache and the hope; the struggle and the progress; the times we were told that we can’t, and the people who pressed on with that American creed: Yes we can.

At a time when women’s voices were silenced and their hopes dismissed, she lived to see them stand up and speak out and reach for the ballot. Yes we can.

When there was despair in the dust bowl and depression across the land, she saw a nation conquer fear itself with a New Deal, new jobs, a new sense of common purpose. Yes we can.

When the bombs fell on our harbor and tyranny threatened the world, she was there to witness a generation rise to greatness and a democracy was saved. Yes we can.

She was there for the buses in Montgomery, the hoses in Birmingham, a bridge in Selma, and a preacher from Atlanta who told a people that “We Shall Overcome.” Yes we can.

A man touched down on the moon, a wall came down in Berlin, a world was connected by our own science and imagination.

And this year, in this election, she touched her finger to a screen, and cast her vote, because after 106 years in America, through the best of times and the darkest of hours, she knows how America can change. Yes we can.

Your values will guide you

If you forge your campaign with a strong set of values the speeches shouldn’t prove difficult to write.

Candidate: In the event you lose and decide to speak extemporaneously: be brief, show humility, be generous and pledge your support. Let your values guide you through these 3-5 minutes.

Staffer: Remember, always have a concession speech ready to go, just in case.

Always write a victory speech. It would be a shame for a successful campaign to be let down at the finishing line. People hate lousy speeches.

If your campaign isn’t forged on a clear set of values the speeches won’t come easily. Mitt Romney discovered this. Don’t get caught out. If you don’t win there’s no shame in delivering a memorable concession speech. History remembers John McCain well for his.

In case you missed it…

I have created a collection of index cards with rhetorical devices for speechwriters to help you add extra flair.