Campaigns and organizations that rely on messages in place of narrative risk saying nothing. Messages deliver narrative, but they are not the same.

Earlier this year I walked into a meeting with excitement. I was quickly deflated. It was a meeting with the campaign manager of a political campaign. It was clear within a few minutes I couldn’t help them.

I had hoped to talk about ideas for the campaign narrative, but the campaign was operating with a false sense of urgency and they only wanted to discuss tactics. I was assured they had a narrative. It became quickly clear they didn’t. What they had was an opponent and some messages.

When I met the campaign manager the campaign was two days old. This is not enough time to develop a concise, coherent narrative. It takes a lot of work to get a narrative right. And you must — a narrative needs to ground all campaign communication.

There are hundreds of different definitions of story. Here’s how I understand it:

a story is an account of connected events presented in a sequence. In campaigns, stories are designed to persuade the audience. People are presented as characters in a story and they are show in pursuit of a goal that expresses their values.

Joseph Campbell uncovered a formula which many of the great stories fall into. He called it The Hero’s Journey. When we hear stories based on these patterns they are more akin to remembering something rather than learning something new. That’s the power of story.

I’ve recently done some work for a client and we decided that the campaign would be pitched as if we were in Act II of a story. We had made it through the lowest point in the story, recovered, and were heading towards a positive climax. Pitching ourselves in this part of the story was central to the client’s empowerment message: the worst is behind us and together we’re headed for victory.

This is how it looks using Jonah Sachs’ visualization of the Hero’s Journey (the client’s place in the narrative indicated by the blue arrow). 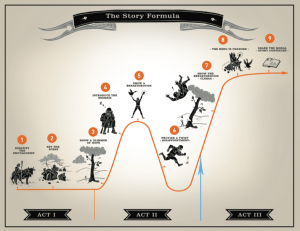 What’s the difference between narrative and messages?

My work generally falls into three areas: strategy, narrative, and messaging. Here’s how I describe them:

Messages breathe life into the narrative. Each message is usually 1-3 sentences. Every campaign or organization should have a list of key messages that are constantly repeated. You return to them time and time again. They must be clear, concise, and consistent.

As the campaign develops and the situation changes you will need to develop new messages or update old ones. This is made easier by having a narrative to guide you.

An example of narrative and messaging

Say you work on a labor campaign. You’re trying to unionize a group of factory workers. Your overarching narrative may look something like this:

After seeing colleagues forced to work long, dangerous hours for years, a group of workers decide that they want a union to represent them. They begin to organize and persuade workers to campaign for an election to unionize the plant (the first high point in the story). Outside interests start to interfere and create a scare campaign telling workers that the plant will move to another state if they unionize. Some workers have doubts about whether unionizing is worth it (low point in the story). The organizers double down and expose the lies of the outside interests. They show the benefits other workers have received after they unionized and that no factories closed because workers unionized. In fact, they showed the factory performed better. An election is held and workers decide to unionize (climax and new high point).

Messaging is developed to deliver this narrative. On day one of the campaign a key message might be:

Long hours are dangerous hours. We are asking for the right to join a union because we’ve seen too many fellow workers injured on the job from working 60, sometimes 70 hours a week.

After a few months that message may be updated after an accident:

Long hours are dangerous hours. This accident highlights why we are asking for the right to join a union. Joe had just worked five straight 16 hour days — this accident could have been prevented if our hours were capped at a safe level.

A new message could be developed once the scare campaign kicks in:

There is no truth in what X is saying. This is part of a scare campaign that’s all about intimidating workers and the company. As we’ve seen in the Y factory in Tennessee and Z in Louisiana: workers are happier, production is up, and the both Y and Z have said union representation has helped business.

These messages are all consistent with the narrative. They are relevant to the audience and make sense in the context of the campaign.

Do you have a narrative?

It’s easy to have heroes, villains and messages in your communication, but that alone doesn’t make a narrative. Stories are not just about good guys and bad guys; stories say something about the type of world we would like to live in. Does your communication do that?