Rebranding can be a long, fraught process. This is how one organization rebranded, what they managed to achieve, and what they learned. 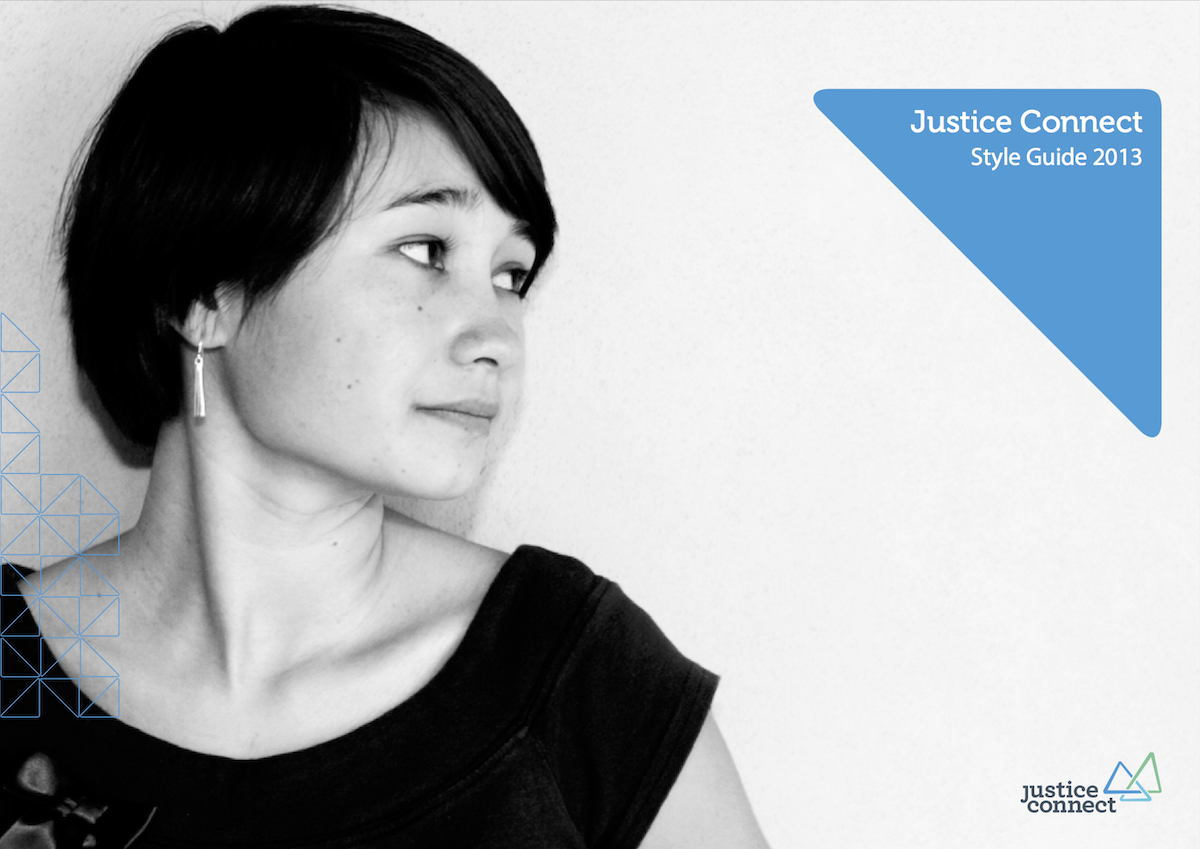 Justice Connect is a non-profit legal organization based in Melbourne, Australia. Justice Connect recently relaunched with a new brand and a new name. I interviewed Justice Connect CEO, Fiona McLeay, to see how the rebrand has helped their work and what they learned. This is an edited version of that interview. 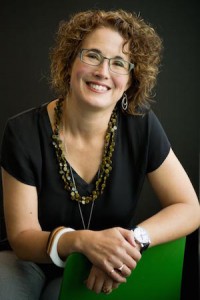 Jeremy: What does Justice Connect do?
Fiona McLeay: It provides access to justice, through the pro bono legal services of the private legal profession.

Why did you decide to rebrand? What was the chain of events or experiences that led you to think about a rebrand and what made you pull the trigger?
There were two things. The first was that in Victoria we had very strong brand awareness within the legal profession that knew what we did and what we were about. But outside of that we did not have much cut through — our brand was mostly resonating with people who already knew us.

Then in the process of looking at the merger with a similar organization in Sydney (also called PILCH) I saw an opportunity to step back and look a bit more broadly at how this organization that we were forming would talk about itself and how the name would align with the strategy. 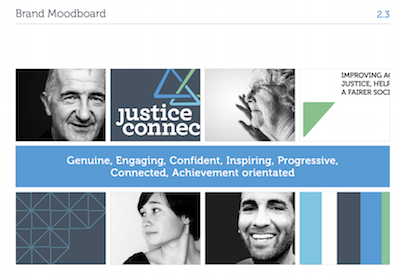 When we unpacked all that we realized that the name was really tied to the organization as it was 20 years ago and tied into ideas about public interest law and clearing houses. Those ideas were still part of what we do but no longer central. So we were looking for a way of talking about ourselves that would be much clearer and would resonate with people who didn’t already know who we were and what we did.

Who did you identify that you needed to reach?
It’s still lawyers and the people who work with disadvantaged people looking for legal assistance — people like case workers, housing support workers, financial counselors, and drug and alcohol workers. Essentially the people who were in touch with our clients and needed to understand who we are and what we do.

Another group we wanted to communicate with better is funders and the targets of our advocacy work. They are not necessarily aware of who we are and we don’t have half an hour to explain yourself. A clear brand is essential with time-poor audiences.

A key crystallizing moment for me came when I watched a TV interview I had given earlier that day. Our name was too long for lower third on the screen. It just said “Fiona McLeay. Lawyer.” That confirmed what people had already said — our name was not short, descriptive, or engaging. When you only have a short period of time to get your point across “Public Interest Law Clearing House is just ridiculous and unhelpful.

Rebranding is challenging and finding a name can be a very fraught exercise. What challenges did you come up against?

I think the key challenge is always the existing name. People always are attached to it even if it’s not very good. You’ve got to persuade people that you are not losing something or if you are, what you are gaining will make up for it. 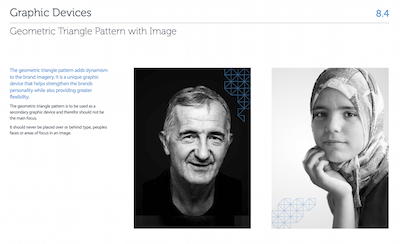 In our case it was a name that had been around for 20 odd years and we had peer organizations in other states with the same name and there was a lot of history to the brand.

A lot of people had put a lot of effort into the organization that was called PILCH at various times and so there’s always a concern that some people will take offence when changing something so intertwined with their work and the identity of the organization.

We dealt with that by having a lot of conversations explaining what we were doing and why. I think aligning the name change with the strategy reset and the merger helped. It showed that it wasn’t just something we were doing for no good reason but that there were very clear strategic reasons for making the change. I think we put in a good process by engaging brand consultants and having a good consultation process where people had the opportunity to contribute.

And what about some challenges that were part of the project and beyond the name. Anything you didn’t expect or took longer to get through than you thought? 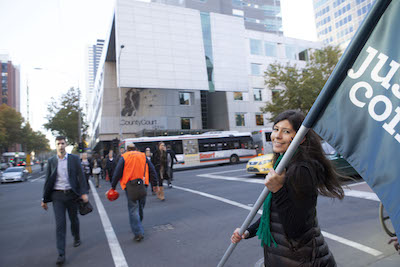 It’s hard to unravel it from all the other work that was happening. I think that in some ways I probably expected more push back around the concept of a brand strategy — I wasn’t sure how the staff would react to that. I think there was certainly some staff who were a bit skeptical and didn’t really understand why this was important. We dealt with that by helping them to see how it could help them in their work. Some of the breakthrough moments came when the penny dropped for some members of staff. When they could see that if our branding was clear, they saw that it would help them communicate with law firms, government, and funders.

One staff member was having some grief with stakeholders. When it became concrete for him that a clear brand would help him solve the problems he was experiencing it helped him buy in to the whole thing rather than engaging in what he originally saw as a sort of academic exercise.

I had been involved in a brand project before at World Vision so it wasn’t so unfamiliar to me, but it’s pretty weird language when you are not familiar with it. You have to be able to think in a bit more abstract ways than perhaps people are used to and feel comfortable with.

How did your existing audiences and key partners react as they started to learn about the project developed and once the brand became public?
It’s been overwhelmingly positive —remarkably positive. I was expecting much more more difficulty.

I think that’s partly because it wasn’t just a rebrand, it wasn’t just a new logo, it was part of a broader strategy, the merger, and how we wanted to communicate. I think that we were presenting a much more consistent face to external audiences that was seen as a real plus by them. I also get much less questions about how everything we do fits together now. 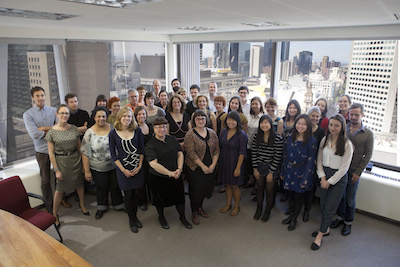 All of the program teams got to choose their color palette which is a small thing but I think gave people that sense of bit of ownership of their work and the brand. So I think people have really responded well.

Having a new website to underpin it all was a big thing because it made it clear for people because we weren’t just talking about our branding — they could see it very clearly and helped us do things like tell our client stories in a much clearer way.

The organization was originally called the Public Interest Law Clearing House (or PILCH). Can you tell me about the process for choosing the name once you had the brand strategy in place? How did you end up with Justice Connect?
We worked with the same brand company who helped us with our strategy. They were adamant that they wanted us to come up with the name, that they weren’t going to give us names to choose. They ran a number of workshops with staff and we sent names out to test with external audiences.

Then we had a final staff workshop and settled on three names to send to our board. Interestingly the board didn’t like our first recommendation. They didn’t like the way it sounded and thought it was too similar to another organization. They didn’t love our second choice either. Justice Connect was actually the third one and the board came back and said option one is out, have another look at option two and three. A couple of board members expressed preference for number three, but didn’t say, “that’s what we had to go with”. So they were good, they didn’t force the issue. We went back to the staff and had another session and ultimately very quickly Justice Connect emerged and everybody kind of looked at each other in the room and went,  “that’s it”. It was an interesting process.

I don’t think I expected the board to play that role but in the end it was very helpful and everyone is very happy with the name. It was a thorough process and I think it produced a good result.

How long did the naming process take?
In the end about a month. We had a pretty tight timeframe because we were working towards a deadline for the merger and the relaunch of the website. There wasn’t room for too much thinking and I think that’s probably a good thing. When you are small organization and paying consultants you don’t want to keep on going back and back and back — you don’t want to string it out.

Looking back, what would you say as been the biggest benefit of your rebrand?

I would say it’s been internal unity around what we do and the external clarity we now have.

The two things reinforce each other obviously, but there’s a much stronger sense internally now among the staff about what we do and how we can talk about ourselves and that flows through externally.

Perhaps this has already happened, but if an organization came up to you and asked you about the process you went through what is the most important advice you could give them?
Don’t think that the branding work is going to give you an organizational strategy because it doesn’t do that. If you are not clear about your strategy and what a brand project is you could end up with a brand strategy that doesn’t reflect the organization’s purpose or have the depth. So I would say be clear about your strategy or at least be working on that or you will end up with a thin brand.

Disclosure: I led the research and strategy phases of the Justice Connect rebrand project. If you’re considering rebranding (or branding) your organization or business, feel free to drop me a line.