If Don’t Think of an Elephant! has been checked off your list, the next stop for persuasive language is George Lakoff’s The Political Mind. 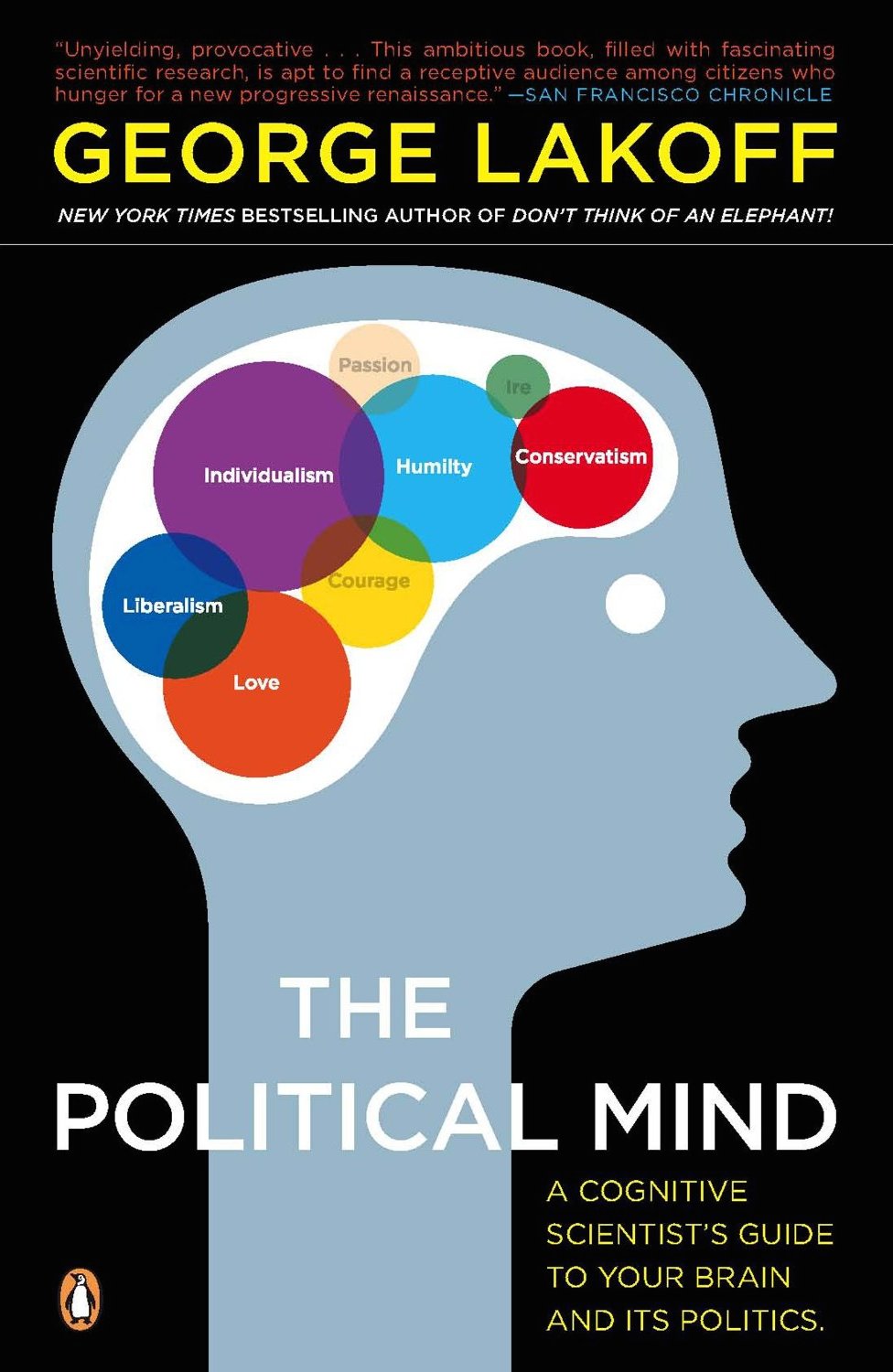 The Political Mind by George Lakoff

You can’t understand 21st Century American politics with an 18th Century brain. That’s the thesis of George Lakoff, the cognitive linguist whose mission is to get progressives talking persuasively on every issue.

The Political Mind is the most theoretical book of Lakoff’s I’ve read. His 2004 book, Don’t Think of an Elephant!, has become the playbook for progressive communicators. The Political Mind is a different beast. It not only looks at language–it delves deep into brain science and cognitive psychology. It’s a harder book to get through, but it offers greater insight into how to create persuasive language from scratch.

People can be “progressive” and “conservative”

Critically, Lakoff identifies a key issue that many people struggle with: the blurry line between a progressive and a conservative. Lakoff says these terms are too neat. “Liberal, “progressive”, “conservative” do not do justice to the complex nature of the world we live in and who we are as humans, and people can hold conflicting worldviews. He calls this “biconceptualism”. Which basically means you can be progressive on some issues and conservative on others. For example, it’s not uncommon for people to be progressive on domestic issues and conservative on foreign policy. Lakoff uses a Saturday night-Sunday morning analogy: “The same person can happily and without a pang of conscience drink, smoke, gamble, carouse, and be adulterous on a Saturday night, while genuinely adhering to the opposite values in church on Sunday morning. Brains make this possible.”

More than that–people can move back on forth on the same issue. What someone thinks today is no guarantee of what they will think tomorrow.

There is no such thing as the “center”

It’s an important concept because it underpins a particular point Lakoff is eager to make: there is no such thing as the “center”. When a progressive is appealing to the “center”, they are actually adopting a conservative position, or the language a conservative uses. Lakoff recommends abandoning thinking of things in a left-to-right scale because that thinking leads to thinking about moving to the right to win votes. Instead, progressives should argue everything using empathy and care and appeal to people who are “biconceptual”.

There is a moral here for progressives: the more they can activate empathy in the public, the more support will be available to them and the worse conservatives will do. Correspondingly. the more conservatives can generate fear in the public, the more support they will generate, and the more that will inhibit support for progressives.
If this is true then progressives should be talking more about their moral worldview–about empathy, responsibility, and hope–rather than accepting fear-based frames to think and talk within. Instead of moving to the right and activating the conservative worldview,…activate the the progressive worldview.

Lakoff is not a fan of “enlightenment thinking”

The main criticism I have of the book is that Lakoff dismisses “enlightenment thinking” out of hand. He forcefully makes the case the the enlightenment thinkers got it all wrong by claiming all thought was rational and reasoned. This ignores the work of people like David Hume who is well-known for saying, “reason is, and ought only to be the slave of the passions.” It’s puzzling that he weaves so much of this critique through the book, and elevates it to subtitle.

The title does the book a disservice–it should not confined to the shelves of political staffers and candidates. It’s relevant to all issue-focused communicators, and it might just help you shift the debate.

The Political Mind is available on Amazon.