Painting Dzhokhar Tsarnaev as “unconcerned, unrepentant, unchanged” is a skillful example of rhetoric, persuasion, and a potent key message. 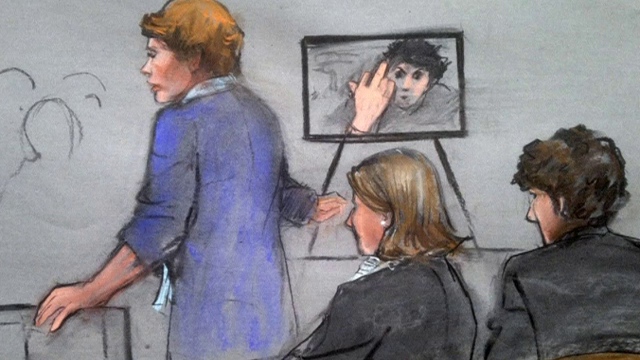 Communicators can learn a lot from lawyers. The good ones tell compelling stories in vivid language that persuade their audience to take a particular action.

Recall the O.J. Simpson trial. The famous line that lingers in the memory of millions is: “If it doesn’t fit you must acquit.” It was a clever device used by Simpson’s defense lawyer. It referred directly to the glove, the logic of the prosecution’s argument, and is an example of assonance.

Nadine Pellegrini, the prosecutor in the Dzhokhar Tsarnaev case, deployed a powerful piece of rhetoric making the case the to the jury to give Tsarnaev the death penalty:

This is Dzhokhar Tsarnaev – unconcerned, unrepentant, and unchanged.

Pellegrini could have said, “Dzhokhar Tsarnaev has shown no remorse.” She knew better. By saying he was “unconcerned, unrepentant, and unchanged” Pellegrini has made a much stronger statement about the content of his character. How?

The rhetorical devices in “unconcerned, unrepentant, and unchanged”

Pellegrini has used five complementary rhetorical devices that are repetitive and amplify her argument.

Accumulatio is also a means of amplification and is a blend of climax and summary. The phrase came at the end of Pellegrini’s opening argument with a clear, forceful image of the person they will sentence.

Synonmia is a rhetorical device that is repetitive and amplifies the message. It adds emotional force and clarity. In this example, “unconcerned, unrepentant and unchanged” are synonyms that stand in for “no remorse”.

Climax, auxesis, incrementeum is a device that arranges words or clauses in increasing force. It’s persuasive because it builds an image in the listener’s mind that ends in the strongest language. A key part of Pellegrini’s case is that Tsarnaev is unchanged — it is used to undercut the defense which is claiming that Tsarnaev’s now-deceased brother used him as a pawn. The order of the words is critical.

The repetition of the same sound at the beginning of successive words. Despite common belief, this can include vowel sounds and consonants.

Three parallel elements of the same length occurring together in a series.

What’s the point of rhetoric?

The point of rhetorical devices is to persuade the audience. Used well they transform dry, precise language into prose that motivates the audience to act in a certain way — in this case sentence Tsarnaev to death (prosecution) or give him a leniant sentence (defense).

“No remorse” or “unconcerned, unrepentant, and unchanged”?

It makes your key messages stronger

These devices make the clause memorable — a key feature of key messages. The purpose of key messages is to create something that will be picked up, shared, and stick in the mind of the audience. “Unconcerned, unrepentant, and unchanged” has been reported thousands of times on TV, radio, print, and online in the last 24 hours.

With the guilt of Tsarnaev established, the key message Pellegrini is trying to impress is that he is a person without conscience. Regardless of your opinion on the death penalty, it’s an impressive use of language.

Expect her to use it again. Expect the media to repeat when she does.

I’ve created series of flash-cards with 38 rhetorical devices you to download, print, and use to punch up your writing.