Monroe’s Motivated Sequence is a persuasive speaking format. It’s a variation on the problem-solution format that is visual and inspires action. 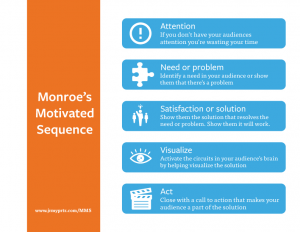 Sometimes we write intuitively. We all use persuasive tricks whether we know we’re doing it or not. Monroe’s Motivated Sequence is something you may be using in your speeches, presentations, and stories and you may not even know it.

Alan Monroe, a professor at Purdue University, created MMS in the 1930s. He said,

Although individuals may vary to some extent, research has shown that most people seek consistency or balance among their cognitions. When confronted with a problem that disturbs their normal orientation, they look for a solution; when they feel a want or need, they search for a way to satisfy it. In short, when anything throws them into a condition of disorganization or dissonance, they are motivated to adjust their cognitions or values, or to alter their behavior so as to achieve a new state of balance.

It falls into the familiar problem/solution narrative and is similar to the Ill, Blame, Cure, Consequence message grid.

Monroe’s Motivated Sequence is intended as a persuasive speaking format, but like a lot of communication techniques, it has other applications. I’ve used MMS in speeches, web copy, and narrative training material.

So how do you use it?

If people aren’t listening it doesn’t matter how great your speech is.

Show the audience that it really needs something or there’s a problem to be solved. If you can do it simply, quantify it.

The solution needs to satisfy the need or the problem. The audience needs to accept that problem is workable and solvent.

Drew Westen (who I’ve written about often) says the more you get people picture something the more likely you are to activate the circuits in their brains that get them to act.

Chances are you want your audience to do something. Buy something, vote, attend an event. When people know the problem, the solution, and know how it looks, your ask is likely to be more persuasive.

Let’s see how it works. In his book, The Political Speechwriter’s Companion, Robert Lehrman mentions Leland Stowe, a Pulitzer Prize winning writer. In 1948 Stowe recalled what he experienced on a street corner in Athens.

I pray that I’ll never have to do it again. Can there be anything much worse than to put only a peanut between a child and death? I hope you’ll never have to do it and live with the memory of it afterward. If you had heard their voices and seen their eyes, on that January day in the bomb-scarred workers’ district of Athens …. Yet all I had left was a half-pound can of peanuts. As I struggled to open it, dozens of ragged kids held me in a vise of frantically clawing bodies. Scores of mothers, with babes in their arms, pushed and fought to get within arm’s reach. They held their babies out toward me. Tiny hands of skin and bone stretched convulsively. I tried to make every peanut count. In their frenzy they nearly swept me off my feet. Nothing but hundreds of hands, begging hands, clutching hands, despairing hands; all of them pitifully little hands. One salted peanut here, and one peanut there. Six peanuts knocked from my fingers and a savage scramble of emaciated bodies at my feet. Another peanut here, and another peanut there. Hundreds of hands, reaching and pleading: hundreds of eyes with the light of hope flickering out. I stood there helpless, an empty blue can in my hands… Yes, I hope it will never happen to you.

This opening is the attention getter. Here’s the rest of it, annotated.

Who would say that a child’s life us worth less than a movie a week, or a lipstick, or a few packs of cigarettes? Yet in today’s world there are at least 230 million children who must depend upon the the aid of private agencies and individuals. From Amiens to Athens, from Cairo to Calcutta and Chungking, millions upon millions of waifs of war still hold death barely at arm’s length. Their only hope rests in the private relief agencies which, in turn, depend entirely upon you and me — upon how much we care and what we give.
A world-wide campaign exists as a demonstration that the people of the United Nations do care. Our own branch of UNAC is American Overseas Aid — Inited Nations Appeal for Children, with headquarters at 39 Broadway, New York City. In February, American Overseas Aid makes its appeal to raise $60,000,000 from Americans. That’s something to put peanuts forever in their place. Something big enough for every American to want to be in on. Every penny contributed to American Overseas Aid will help bring food, medical care, and new life to millions of child war victims.
If we could hear their voices and see their eyes, countless of millions of children, now hungry and diseased or soon to die, would run and play and laugh once more. It only depends on how many of us hear and how many see.
Look at their reaching outspread fingers and send your contribution to American Overseas Aid, 39 Broadway, New York.

Alan Monroe holds this up as one of his favorite examples of MMS.

Stowe spends a large part of his short speech grabbing his audience’s attention with his personal experience. It helps that he writes and speaks visually — look again at how he describes the scene: “dozens of ragged kids held me in a vise of frantically clawing bodies; “Tiny hands of skin and bone stretched convulsively”; “Six peanuts knocked from my fingers and a savage scramble of emaciated bodies at my feet”. He evokes this visual again at the end.

His opening/attention-getter also introduces the problem. He follows this with more detail (“230 million children”) to quantify his personal anecdote.

“Sequence” is the important word in Monroe’s Motivated Sequence. Attention, Need/Problem, and Solution must be delivered in that order.

Visualization should be paired with the Call to Action at the end in the order you think works best.

Using Monroe’s Motivated Sequence in your next speech

MMS is not completely prescriptive. You can insert other parts into your speech or presentation or story. You may decide to tell a joke, include more background, or address the elephant in the room.

You’re able to expand MMS to include these other elements. What’s important that you first get grab your audience’s attention, describe the problem, show the solution, and ask them to act by visualizing the success.

Like a great outline doesn’t make a great film, Monroe’s Motivated Sequence won’t — own its own — make a great speech. But does give you a structure to work with.