When an organization’s values are only words, problems arise. World Vision is learning this. By caving in to donors it has an image to repair. 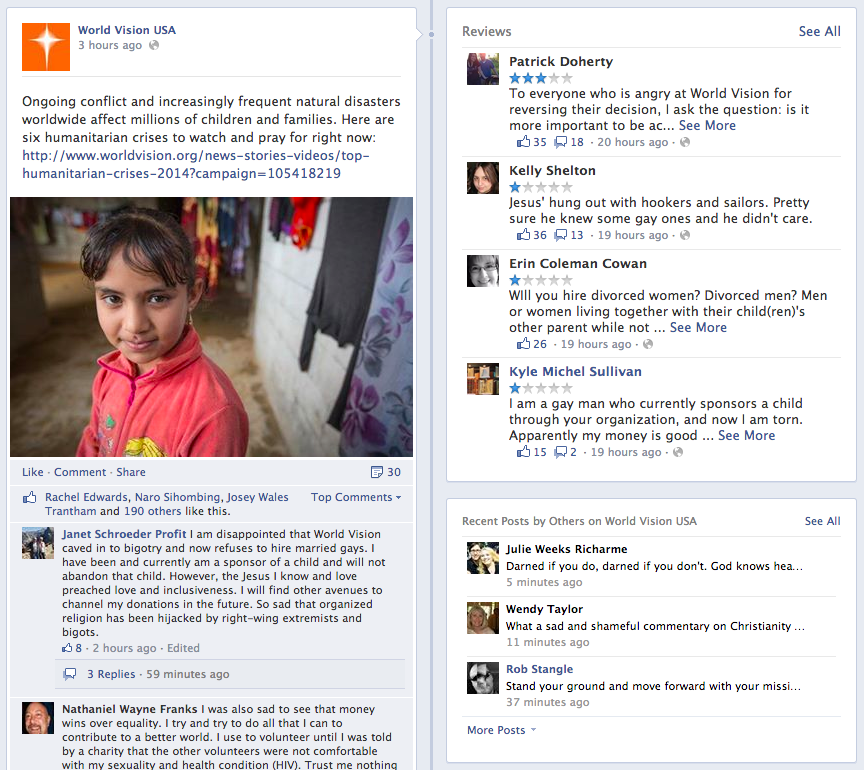 World Vision has a values problem. Yesterday it announced that it was reversing its decision to hire people who are in a same-sex marriage. It was widely welcomed for its original decision; it is being condemned for its reversal. World Vision is taking a battering in the press and in social media. This is the mess an organization can find themselves in when it doesn’t know its values.

World Vision’s original decision to allow people in same-sex unions to work at World Vision was undoubtedly a product of the momentum towards equality. The change is real and it’s been swift. Last year The Supreme Court struck down the Defense of Marriage Act which was used to discriminate against same-sex couples. World Vision’s first step, however small, was another sign of that progress.

Perhaps the reversal shouldn’t surprise us. World Vision USA is a conservative organization that insists its employees must not engage in any sexual activity outside of marriage. It has wealthy donors. Donors like these often seek to extract large amounts of influence in the organizations they give to. World Vision is no different. But its reversal it a clear contradiction of its stated values:

We act in ways that respect the dignity, uniqueness, and intrinsic worth of every person — the poor, the donors, our staff and their families, boards, and volunteers. We celebrate the richness of diversity in human personality, culture, and contribution.

When an organization does not have a clear set of values that they believe in and live everyday, problems arise. Values help an organization understand its purpose, make critical decisions, and communicate with coherence and clarity. When those values are not deeply embedded in the organization it allows them to send contradictory messages and crumble under the slightest pressure. This is what happened to World Vision. It was completely unprepared for the backlash. Twice.

The press release announcing the reversal stated, “We are brokenhearted over the pain and confusion we have caused many of our friends…” This type of tone-deaf communication suggests World Vision’s priorities lie with its large, influential donors and not towards “tackling the causes of poverty and injustice” that it says it does. It has inflicted another injustice, not tackled one.

World Vision had two options when its major donors started calling. The first was to speak to a values base and explain its decision, perhaps losing a few donors in the process. They chose the other option.

Some have suggested that World Vision would have been better not to have done anything and avoid this mess. That may have been a wise PR move, but it is delaying the inevitable. Organizations that ignore — and indeed hinder — the march towards equality and justice will become irrelevant. At some point World Vision will need to relax its dogmatic stance. It should have been this week. It was, then it wasn’t.

World Vision needs to take a long look at its values. If it truly believes in justice, dignity, and uniqueness, then it must recognize it, celebrate it, and own it. Otherwise they are just words.

The lesson: know your values and live them

It may seem to be a bump in the road towards justice and equality, but the reaction against World Vision is surely a sign of the progress that’s been made. Smaller donors — but larger in number — are reconsidering their support of World Vision. It now faces months or even years of repairing its tarnished public image.