When you come up against a campaign with millions of dollars in its coffers, you have to get creative. 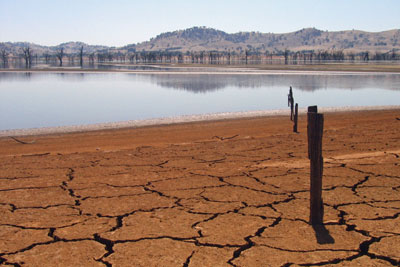 After decades of extracting too much water and severe droughts, Australia’s food bowl, the Murray-Darling basin, was running out of water. The river no longer ran to the sea. There were two major obstacles to overcome: plenty of money working against us and politicians who would say one thing to their constituents, and then do nothing.

We had to show community support for the return of water to the river and we had to make it an election issue. 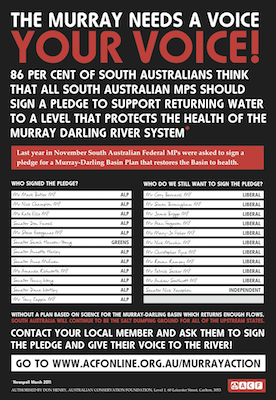 I created a strategy that would make inaction untenable for politicians seeking re-election. The first step was commissioning a poll to show community support to return water to the river.

I commissioned a poll that found 86 percent of people supported the return of water to the river. We asked all MPs and Senators to pledge support for water reform. Half refused.

In response I commissioned the design  of a full-page ad to run in the local paper naming the politicians holding out.  I booked the ad space and showed the politicians the ad naming and shaming them that would run if they didn’t sign the pledge. 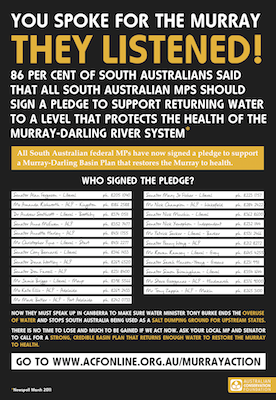 It marked a turning point. Within 24 hours every politician had signed on. We ran a revised version of the ad congratulating the politicians for supporting the return of water to the Murray-Darling. Off the back of this we were able to generate positive media coverage.

Despite the scare campaign funded with millions of dollars, there was now bi-partisan support which resulted in the biggest return of water in the world.

Jeremy brings a creative and strategic eye to the development and delivery of campaigns. He displayed these talents in my work with him on the Australian Conservation Foundations campaign to return water back to the environment in the Murray River system. It was a supercharged political process with deep divisions across major political parties.

Opponents framed the debate along the old jobs versus environment storyline. Our task was to show the public that big decision makers could agree to give a river system that is the lifeblood of Australia a good drink.

Jeremy crafted a strategy for bringing all major political parties together to sign up to a cross-party pledge to return water to the river system in one of the most influential states involved in the debate.

The result of the strategy was that every politician from the major political parties signed up to the pledge and supported the largest return of water to the environment that has occurred anywhere on Earth.

I recommend Jeremy to you.